The coffee tree is a tropical shrub, it grows where it is hot! You will find it everywhere between the Tropic of Cancer and the Tropic of Capricorn, this is called the “Bean Belt”. The coffee tree also needs humidity to develop a beautiful, red seed. This is why it is found in hot countries and at altitudes between 600m and 2000m.

There are about 90 countries that have the necessary conditions for coffee production. They are divided between “the Americas” (Central, South, North), Africa, and Asia-Oceania. Coffee farming often represents a major contribution to the economy of producing countries.

Although coffee plantations are often imagined as huge areas of mono production as in Brazil, 70% of world production comes from farms of less than ten hectares, most often even below five -hectares. These are fragmented plots on which coffee is associated with food crops such as maize, cassava, or plantains. This traditional culture is generally respectful of the environment because this method of agriculture requires few pesticides and chemical fertilizers. Finally, rarely mechanized, picking requires significant labor time, which provides work for a very large number of people.

Ethiopia and coffee: a shared history since the beginning

With 2.5 billion cups drunk each day, coffee is the second most drunk drink in the world. Ethiopia is the 5th largest coffee producer in the world behind Brazil, Vietnam, Indonesia, and Colombia. Africa’s leading exporter, it produces more than 7 million 60 kg bags of coffee beans per year. The country represents more than 4% of world coffee production. Known as the birthplace of Arabica coffee, Ethiopian coffee is one of the most renowned in the world for its wild acidity. Let’s take a quick look at the history of Ethiopian coffee, its peculiarities, and what is the best coffee choice.

Ethiopian coffees are divided into three main categories according to their production method: 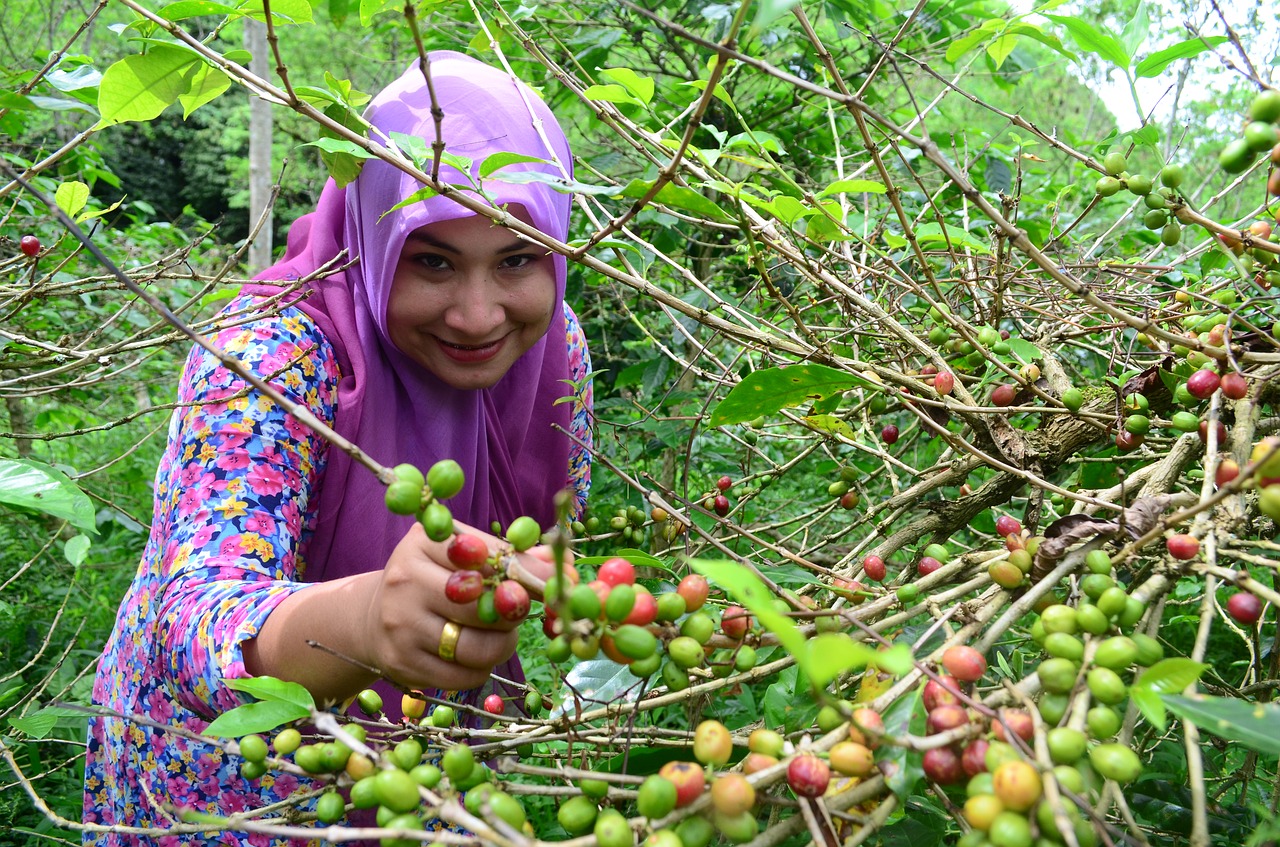 The history of coffee in Ethiopia

Located in the center of the Horn of East Africa, Ethiopia shares its borders with Sudan, Eritrea, Djibouti, Somalia, and Kenya. Its economy is mainly based on agriculture with more than 140 types of crops. Ethiopia grows all types of grains, beans, peanuts, tea, owers, fruits, and vegetables, but coffee accounts for the largest share of its exports.

According to legend, the discovery of Arabica coffee dates back to the 6th century in Abyssinia, present-day Ethiopia. A shepherd would have noticed a particular agitation of his goats following the ingestion of red berries of the coffee tree. Finding the next day that his goats had not been poisoned, he tried the experiment himself and then spread the use of it. During this period, the Ethiopians chewed grains and leaves, cooked them, or mixed the ground grains with animal fat.

It wasn’t until the 15th century that the beans extracted from their shells were regularly roasted and ground to give the drink we know today. The shepherds reportedly related the facts to Islamic clerics in their region, the Sufis. They would have made an infusion from the fruits of the tree, a stimulating infusion that kept them awake during the night and the day before. Sufi monks exported the product to Yemen before it reached Europe and then other parts of the world. In the case of Ethiopia, coffee appears to have become an important crop by the end of the 16th century and a major source of income only by the end of the 19th century.

The country then exported its grains to destinations as far away as London, Marseille, New York, or Trieste. However, until 1920, the bulk of Ethiopian production remained consumed in the country. The development of road infrastructure and the decline of the ivory trade will mark the boom in exports, especially in the 1940s. In 1952, a law, Proclamation No. 121, marks the start of price regulation. and the obligation to sort, grade, and classify coffee intended for export.

In 1955, the Coffee Cleaning and Grading Regulations established a first official list of coffee names according to their origin. The names chosen were and remain Harrar, Sidamo, Jimma, and Lekempti. Two years later, in 1957, the National Coffee Board was born. Its role is to standardize the rules of packaging and circulation of coffee and to deny quality standards through the Coffee Liquoring Unit. This establishes a classification with a system of grades ranging from 1 to 5. Grades 1 to 3, the best ones, are intended for export while grades 4 and 5 are limited to the domestic market.

The end of the International Coffee Agreement in 1989 and its quota system created a global coffee crisis. Prices drop sharply. Many of the smallholders have had to sell at a loss, leading them to bankruptcy. To remedy this crisis, the Ethiopian government decided to liberalize the sector. At the same time, it sets up a licensing system to avoid any monopoly situation.

Our second Ethiopian coffee, Trailblazing Zelalam is named after a young runner sponsored by Girls Gotta Run Foundation which this lot helps fund. It's from the same farm as our other Ethiopian but has a different flavour profile with more of a black tea & light taste. #coffee pic.twitter.com/5EoA9NRdWa

The year 2005 saw the start of the clash between Ethiopia and the National Coffee Association led by Starbucks. The multinational used the Ethiopian names, including the varieties Yirgacheffe, Sidamo, and Harrar, without wanting to hear about brands to be remunerated. Oxfam, an English organization advocating fair trade, accused the American group of months of depriving Ethiopian farmers of at least $ 88 million in additional income per year. The controversy ended in 2007 when Starbucks and Ethiopia signed a distribution, marketing, and licensing agreement.

In 2008, a secure platform for transactions was created, the E.C.X. (Ethiopia Commodity Exchange). Its function is to “ensure the development of a modern and efficient trading system” which “would protect the rights and benefits of sellers, buyers, intermediaries, and the general public”. When it arrives at the E.C.X., the coffee is repackaged and classified according to the production and the quality of the cups before being auctioned off to the highest bidder.

Since then, global warming has posed a challenge for coffee growing in Ethiopia. As Geo.fr reports, 60% of production areas could become unsuitable for growing coffee trees by the end of the century: “To cope with the effects of global warming, we would have to increase the 32 meters each year, according to the researchers”.

Ethiopia produces Arabica coffee exclusively. If this coffee is one of the most famous in the world, it is for its smoothness and delicacy of its aroma. Ethiopian coffee is mainly farmed in the west and the Harrar region. The appellations are named after the region where the coffee is grown. In the West, we find the regions of Limu, Tepi, Lekempti, Djimmah, Bebeka, Sidamo, Yirgacheffe. Half of the production is cultivated on mountain ranges from 1500 meters. This altitude, 500-year-old craftsmanship, temperate climate, and rich soils provide optimal conditions for coffee.

Special features of the taste of Ethiopian coffee

In Ethiopia, there are several varieties of coffee all of the Arabica type. The varieties are old and take their name from the region of cultivation: Harar, Jimma, Limu, Sidamo, Yirgacheffe, etc. Intensive cultivation from former privatized state farms occupies less than 5% of production. This allows Ethiopia to mainly offer coffee from organic farming.

In general, Ethiopia offers a complex coffee with medium acidity. Nevertheless, the country presents a great contrast of landscapes and altitudes as well as a great variety of unclassified grape varieties. This gives a great diversity of flavors and aromas. Buyers differentiate the cafes according to the region.

Here are the main growing regions and their aromatic profile:

Ethiopian coffee is best enjoyed at any time of the day. Some terroirs can easily accompany the coffee break at the end of the day thanks to their low level of caffeine. The freshness of Jimma’s coffee makes it ideal for the summer period.

Our recommendation when you buy Ethiopian coffee is:

Best coffee Ethiopia: which brand to choose? As I just touched on, I invite you to buy Ethiopia coffee in the form of beans. Of all the packaging, this is the least processed. Thus, once harvested, sometimes washed, and then dried, the beans are roasted and directly packaged. They do not follow any industrial process to be ground. Ethiopia offers a classification system that takes into account the number of defects. Before being loaded onto a truck and then exported, a sample of 300 grams of green coffee is taken and then supplied to a group of experts. They spot defective grains. If the quantity of visible defects exceeds that announced on the batch, the coffee is rejected. The exporter must then go through a sorting phase again or sell his coffee locally. He cannot downgrade his batch and export it. Grades 7 and 8 are prohibited for export.

Ethiopian coffee can be found in everyone’s favorite coffee shops. Quite a few experts admit to being a fan of its balance, but also of its complexity. What they advise you is to always favor the purchase in the form of grains. Thus, the aromas will be better preserved than in ground form. When you drink coffee from Ethiopia, especially from the Jimma region, it is possible to taste the climatic freshness of this region and the fertility of the soil on which it was grown.